5 Facts You Didn’t Know About The History of Corsets 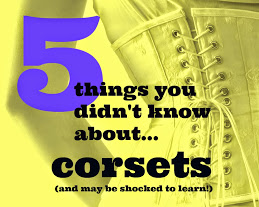 The history of corsets is a fascinating one. These uncomfortable undergarments created an unmistakable hourglass figure that women were often required to wear. The style in Victorian era was an age where femininity took precedence over mobility, and social status was far more important than comfort. However, there is more to the corset than meets the eye.

Here are 5 Facts You Didn’t Know About the History of Corsets:

Corsets Date Back to the 16th Century – or Earlier!

Corsets became truly relevant in the 16th century, when members of female nobility began wearing undergarments made of whale bones to enhance their shape. With that said, historians have found evidence that corset-like undergarments date back to as early as Ancient Greece.

The Modern Corset Came to Life in 1851

A woman named Roxey Ann Caplin is known as the “inventor” of the popular Victorian-style corset. A writer from England, Caplin was certainly not the first to create or manufacture a corset. She was, however, one of the first to use a lace-up design to slim the waist and push-up the bust. After exhibiting her designs in London, her unique corsets quickly set the standard for undergarments at that time.

Corsets Were A Status Symbol

Throughout history, wearing a tight corset was a way to display your social status. Because corsets greatly restricted mobility, they demonstrated that the wearer could afford servants to complete everyday tasks. Not only did they let everyone know where the wearer stood in society, they were also a testament to her moral standing. Corsets added a feminine appeal, but also showed that a “straight-laced” woman was morally respectable.

While traditional Victorian corsets went out of fashion in the mid-1900s, certain elements still remained relevant in undergarments of the 1940s and 1950s. Waist cinchers or girdles were a staple in the 1950s, keeping the tradition of corsets alive. Even now, figure smoothing undergarments often feature boning or stays, which are indicative of the lasting significance of the corset.